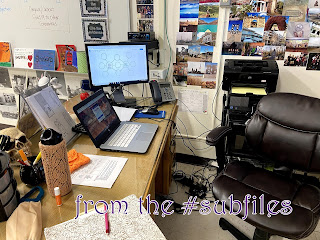 Monday at the continuation high school. They had a video. (This was the Monday before the election, so it was about the candidates.)

First and second periods had gone smoothly, so I had established a routine. I introduced the video, explained the assignment that went along with it (notes followed by three questions), and then I started the video. While watching the first ten-ish minutes, I input the roll (I had two computers going). Then I stopped the video so we could do the notes together before continuing on.

Third period. A couple of the boys greeted each other in chat, but it wasn't anything major, so I didn't think anything of it. Then I did my intro and started the video.

We were a couple minutes into the video when one boy turned on his mic and made a noise.

The same boy turned his mic back on and played music. It was something with a strong beat.

He turned his mic back on and the music was still playing.

I muted him again.

We did this one more time. I was just about ready to stop the video and warn him that disrupters would be removed from class (I have the ability to remove anyone from the meet) when he logged out.

That solved that problem. And with the attendance software I have running in the background, I have a record of when he was there and when he left.

But, of course that wasn't the only issue. While that boy was entertaining the class, the class was on the chat, commenting on it all.

i hear a cat

A2: im ball of confusion

With the loud boy gone, I could deal with the chat. I typed in that they needed to stop playing around and that the chat thread would be reported to the teacher. Then I delivered my coup de grâce. I disabled the chat.

At the beginning of the year, I lamented the goofing off via chat. I came up with a solution for the class I was in that seemed to work. Since then, Google has added a couple dandy little controls for us meet runners. There's now a little "switch" I can toggle to take away their ability to use the chat.

I had no more issues while the video was playing. (Then I had to restore the chat so the kiddos who were on task could answer my questions, but by then the problem was solved.)

And how do I have such a precise transcript of the chat? I took pics on my phone so I could email them to their teacher. Because, I don't threaten things I'm not going to follow through on.