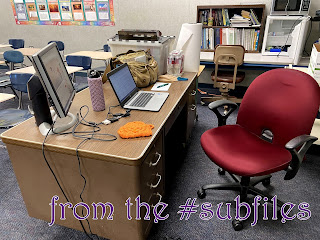 Eleventh grade English. They were reading Catcher in the Rye. The teacher had left links to the story being read (on YouTube), and we were to listen to the story (chapters three and four). Then they had questions to answer.

I had enough time to play the chapters with about ten minutes to spare.

That, of course, is not how things turned out.

I don't know if it was because the wind over the weekend had knocked out power, or if it was that I was working from a Chromebook, or if I'm just doomed. Because it just did not work all that well.

I've done the whole show-the-class-a-video remotely before. This time, it took for-ev-er for it to load so I could present the thing to the class. I had two screens going. I had set up the video ahead of time. Once I had intro'd the lesson, I went to present (which is just a thing I click on screen), and it would not load.

Finally, it loaded. And I started. And then I got booted out of the meet.

Over two days I had to do this four times. And four times, I spent more of the period trying to get the video to present than actually having the video present. I gave up trying to take attendance while class was going, but that didn't help. In fact, I got to the point where I wasn't doing anything other than letting the video play.

But still, one period I got booted from the meet SIX TIMES.

After I had trouble the first time, I warned the classes that it might happen. I told them if I fell out of the meet, I'd be right back, so to just hold tight. And for the most part, they did.

(I had a few bail on me, but with the attendance extension I have running in the background, it was easy enough to know who.)

When I emailed their teacher, I let him know of the issues. And that a couple of the classes didn't finish listening to the book. (The links were in their Google Classroom, so they could listen on their own later.) I also let him know if the students complained that they had every right to complain, because it was a mess.

I even apologized to the students. It wasn't their fault that my wifi (on campus) was wonky.

But, they weren't too upset. In fact, several left messages in the chat for me:

I'm glad you were patience :^)

have a good day, stay safe

I did what I could. It's all I could do.