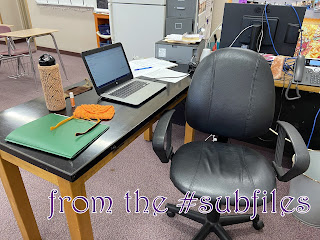 Special ed English. They had a "make-up day".

The assignment was to make up any work they had yet to turn in. I've been hearing from teachers that students not turning things in has been an issue. And since they can't stand over the kiddos, it's harder to keep them on task.

With the way things are set up, I have the ability to check what the kiddos have done and what they haven't done. So, I let them know that if they didn't know what they still needed to complete, I could look it up for them.

Period four. There were two students who had turned in all their work, so as a reward, they didn't have to remain in the meet. The rest of the students asked what they needed to finish.

I looked through June's assignments. She had missed that Monday's assignment. A second later, that assignment was submitted. June told me that she had just forgotten to submit it.

June wasn't the only one to quickly submit work. Three of them went from having a couple of missing assignments to having none.

Their teacher had said the two students who were done didn't have to remain in the meet. She did not say the students who finished during class could leave early. So, I told the kiddos they could work on other work, but they had to keep the meet on.

But June did not hear me. She said she had finished, and "bye". . . Poof. She had logged out before I could tell her not to.

Well, it wasn't like she had work to finish, anyway. And I could mark her as having left the meet early. (They've modified the attendance so I can note who was late and who left early without having to mark them as not having attended class.)