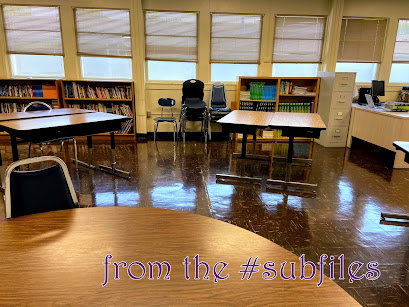 Have you ever done a Google Hangout?

I know most people are doing the Zoom thing, but my district decided that they'd utilize the programs they already had, especially since the computers that the students use are Chromebooks. It's a little clunky, but we're all learning how to do things in this new reality we find ourselves in.

In Google Hangouts, there is a messaging capability, where users can type in their thoughts. I knew this was there, but I hadn't really thought much about it.

The boys are broken down into two classes: the freshmen and sophomores, and the juniors and seniors.

The frosh/soph class discovered the messaging. And they've been using it.

Ronan keeps typing in "Massey= *clown emoji*". Then Massey has to retaliate. The poop emoji has made several appearances. So, then Miles (if you remember my summer session posts, he was the "third boy") has to join the fray. And I'm trying to, you know, teach, so I'm not really reading and deciphering. But they think it's all good fun. . .

Half of me wants to find a way to turn off the messaging. The other half of me is thinking this might be a useful way of checking understanding of concepts during lessons.

I should have known the boys would find some way to goof off during class, even from their own homes via a video conference.