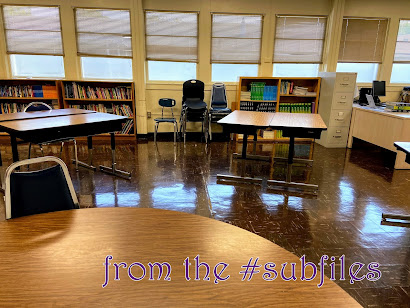 The first week of school (last week) was the weirdest first week I've ever seen. Naturally.
The first day was a Tuesday. It was pretty much the kiddos who had attended the summer session. By Friday, all but two or three students were attending at least one of my classes a day. (I'm covering the math and science classes, so I have them all twice a day.)
And then there's Juan.
I worked from campus on Thursday. I went up to the office for one thing or another when I ran into the principal and Juan. Juan hadn't attended any classes thus far. Supposedly, it was because his computer wasn't working.
So, they'd given Juan a new computer, and the principal asked me for my Google Classroom codes so Juan could add my classes. (I didn't have them on me, but I had sent Juan emails with them. The principal easily located those emails and got Juan signed in to my classes.)
I've been emailing the kiddos the link code for the Google Meet daily. (There are reasons why I'm doing it this way.) They seem to be getting them as I have five to six students in each class. (It's a small school with sixteen students total. I have eight students enrolled in each period.)
I worked from home on Friday. I got this email during second period:

Juan has been on line, but couldn't join first and now second period because he doesn't have an invitation.
Please all teachers, send Juan an invitation link.

Sigh. I send out the meet link daily to all their emails. I sent it to him again. Is he checking his district email?

I had him again fifth period. Did he show? Nope.

It seems like Juan either doesn't understand how any of it works, or he's figured out the way to ditch class without getting penalized in his attendance. I'm not sure which.

When I went to check the work turned in, guess who had done the day's assignment?

It'll be interesting to see if Juan shows up to class next week.