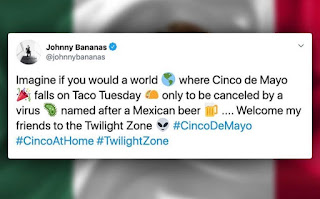 Last Tuesday was Cinco de Mayo. Which is not something I normally pay attention to. But Luisa pointed it out, and she wanted Mexican food that day.
(This next bit would completely shock my family if they ever read my blog, because I am not a fan of Mexican food. I never have been.) The roommates and I have a regular Mexican restaurant. It's very popular in the area. Most evenings, it's a good half hour to 45 minute wait to dine in.
But, of course, these are not normal times. The restaurant is take-out only at the moment.
The last time we had a hankering, the prior week on Tuesday, we phoned in an order and were able to pick up our food easily. We didn't drive down there until the food was ready, and while there was a place set up to wait in line, there was no line when we got there. (A couple people arrived after us, so there was a line of three when we left.)
So, on the 5th, we went to call in an order...
Really, that should have been our first clue.
The line was busy. As the restaurant is usually a sit-down establishment, they don't have a dedicated order line. And the line continued to be busy for a good half hour. But finally, we got through and put in our order.
The lady on the phone said that it would take 50-60 minutes for our food to be cooked. But that the line would take 20 minutes.
When we got there, well, the line was way longer than 20 minutes. It was around the corner and all the way past five other businesses in the strip mall. Now, of course, that line had everyone giving each other 6 feet of space, but it was still a long line.
In fact, we were giving everyone more space, as the line was in full sun on an 80+ degree day, so many of us hid behind the shadow of the columns holding up the overhang, and those were more than 6 feet apart.
But the line wasn't moving.
By the time we got our food, we had been waiting for at least an hour, although likely more. (I didn't bring my phone, so I wasn't watching the time.)
How long were we waiting? A demonstration:
Next door to the restaurant is a Baskin-Robbins. Many people went in, got their ice cream, and left while we watched.
After a half hour or more, we turned the corner, so we could actually see the front door of the restaurant.
The guy two ahead of me in line looked to the woman behind him, and asked if she minded if he stepped out of line for a bit. He went into the Baskin-Robbins. He bought a cone with two scoops. He finished his cone with lots of time to spare by the time it was his turn to pick up his food.
Note to self: do not order Mexican food on Cinco de Mayo. That was truly a stupid move.
Posted by Liz A. at 8:00 AM