For Christmas, my niece wanted a beanie like one she'd seen online in periwinkle. Okay then...

Yes, Christmas. I really only started my Christmas knitting after Christmas, so all those gifts are late. And yes, this is the niece of the gray behemoth from last year.

From the picture (which I'm linking to only out of copyright concerns), I could tell it was a rather fine yarn knit in a one by one ribbing. But finding the color periwinkle proved to be a challenge. Ultimately, I had to search "periwinkle" on LoveCrafts.

From the picture, I could tell they used a tubular cast on. (These were machine knit, I'm sure, but I can still replicate in hand knitting.) I've never done tubular cast on before, but I have seen it done and I can follow directions. (Every technique is demonstrated somewhere online. That makes picking up new skills easy.)

It turns out that the tubular cast on is a bit complicated. You have to use a provisional cast on, then work five rows in a specific manner and... (If you're interested, you can see a video of this here.)

I set aside an afternoon just to cast on. It took me two and a half TV shows to complete, but I managed it. Then I joined to work in the round. And that's when my sneaking suspicion proved to be correct... 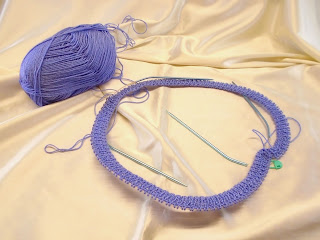 My hat was way too big. 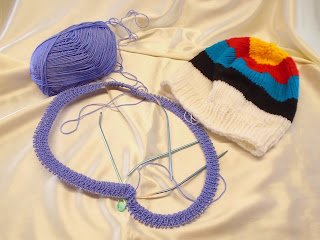 For comparison, the above image has an actual head-sized beanie next to it. (It's more of a child size, but child size versus adult size isn't that much different.)

There's nothing for it now. I have to frog it and start over.

I mean, unless you know a giant that wants a beanie. In periwinkle.

I sat down to recalculate. Because somewhere the math went wrong. And that's when I saw it.

I had done the math correctly. Alas, when using niece's head measurement, I transposed the digits (instead of 23 inches, I calculated 32 inches). Someone, ahem, wasn't paying attention...

Considering how many times I gently correct students in math class with, "Does that number make sense?"...
Posted by Liz A. at 8:00 AM