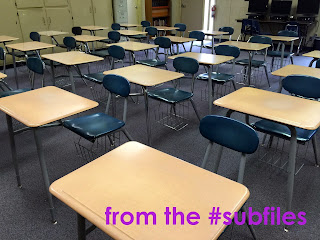 Continuation high school journalism class. (Yes, they have a school newspaper.) It's the end of the year, so the class only had four students. (One was absent.)

The continuation high school works on credits. Once they've earned the required 220, they are done. By this time of year, most of the seniors have completed high school.

It was newspaper delivery day. Two students were to go pass them out to all the classes. One of the assigned students was absent, so I let the other student pick her partner. But all three girls wanted to go. And the boy wanted to join them...

Five minutes later I got a call from another teacher. They were being disruptive. (Naturally...)

Well, they should have come back soon, so I could scold them. I waited.

I went to the door looking for them. They were not visible on campus. (The campus is small enough that I could see all of it from my door.) But the principal spotted me.

The girls did eventually return. The boy returned some time after them. (This is the way subs get into trouble.) What happened? They explained that several of the papers had been stapled badly, so they had to fix.

The boy...? He was taking advantage of the situation. Naturally.
Posted by Liz A. at 8:00 AM