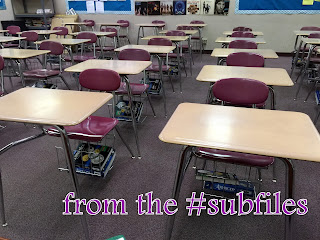 I was covering two days of a U.S. history class. As they were juniors and Ms. G's classes tend to be on the good side, I wasn't too concerned when a few students gathered together while they did their work.

Of course, I made a point of going over to them and looking over their shoulders. And they explained their grouping.

"Kevin needs our help. He doesn't speak any English."

Hmmm. Now I'm suspicious. There are some students at that school that don't speak any English, but usually the teachers give me a heads up (and they give the student an alternative assignment or the student has a "helper"). But why volunteer that information so readily? I hadn't asked.

Plus, the boys were having way too much fun in their little group.

Day two in the class. I was a little stricter with them, but the boys still found their little group. A couple of them went out to the restroom. When one of the boys returned, he stood over another boy, and it was clear something was going on. So, I approached.

The boy sat down. He pulled out his backpack, and then I saw that it had been flipped. So, now I understood why he was upset. I gave the other boy my best "really?" look. I growled at them to get back to work (and stop messing with each other).

It was only after I left the group that it hit me. The boy who had been upset? Was Kevin. Who supposedly doesn't speak any English.

Funny how we were able to communicate pretty readily in English when he asked to use the restroom and when he returned and we discussed his backpack.

This is why I am dubious when I am told a student doesn't speak any English. Because they lie.

But luckily they are really, really bad at this lying thing.
Posted by Liz A. at 8:00 AM