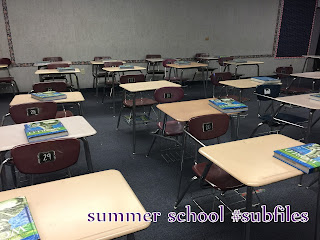 I was not expecting that phone call, but how could I pass up another day of subbing?

Mr. B had them working at their own pace on stuff from chapter 2. Some finished. Some did a lot of staring at walls or talking to friends. (At that rate, some of them aren't going to pass it this summer, either.) The class time passed, I called for them to pack up, and they lined up by the door.

(I'm not a fan of the lining up at the door thing. In fact, I discourage it whenever possible. In this case, I was ignored.)

The student nearest the door opened it...

Oh, but they'd been there long enough. And all it takes is one to slip out...

The first block didn't pull this stunt. But both the second and third blocks did. *rolls eyes*

Half the class had shuffled out when... wait for it... the bell rang. Clear as day. Ahem.

Funny. I heard a bell for the beginning and end of the first block and the second block. And there was a beginning bell for the third block. Explain to me how "the bells aren't working".

This time only about five got out of the room when... you guessed it... the bell rang.

As this is one of my big pet peeves, I made sure the teacher knew what they pulled. Whether he'll do something about it...

(It's summer school. After two hours, some teachers let them out a bit early to be nice.)

And, considering that they're stuck taking summer school, I think they're already getting a consequence for their own bad behavior.
Posted by Liz A. at 8:00 AM