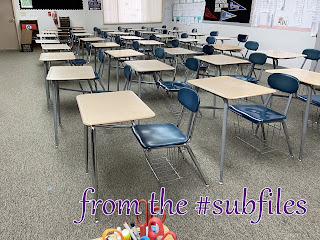 "Oh, I remember you. You're the sub that hates me."

I did remember the girl. Because last time I had seen her... she had said the exact same thing. And, well, I don't remember any animosity.

She insisted that I hate her.

Eighth grade math. It was co-taught, so some of this was directed at the special ed. teacher. Ms. C said perhaps the girl talked too much. I explained that I hold no anger towards the girl, but the girl seemed to think I did.

Actually, she rather enjoyed the idea that I hated her.

It was towards the end of the period that the girl explained why I hated her.

It was a Wednesday. The girl had asked if she could yell out "hump day". I said no. As the bell rang, she did anyway...

I vaguely recall the incident. Kind of? It could be one of those recalls that happen when someone tells you of something that happened in your presence and you only remember it via their memory.

So, anger? No. I was likely irritated. At the time. But I don't carry that anger for more than the length of time it takes to write in the note. (Likely, this didn't make the note to the teacher. I probably sighed in exasperation and was glad the period was over.)

But, middle schooler. They think the whole world revolves around them. And they think that we spend more time contemplating them than we really do. I mean, I'm only recalling this now because I knew it would make a good blog post. If I don't see her for a month or two, I'll be blindsided by my supposed hatred of her next time, too.
Posted by Liz A. at 8:00 AM

Email ThisBlogThis!Share to TwitterShare to FacebookShare to Pinterest
Labels: #subfiles, 8RE, about a student, middle school, substitute teaching