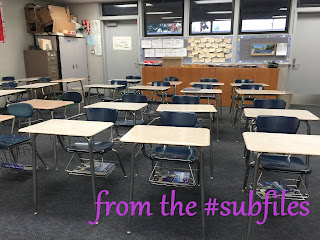 Seventh grade history. They had bookwork.

It was second period. A student grabbed a huge trophy and headed for the door...

"That's our hall pass," another student informed me.

The thing was massive... 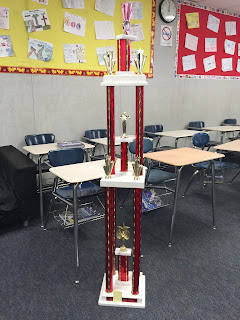 I've covered this teacher's classes before. There used to be something way more reasonable. I recall a shoe.

"Someone lost the last pass, so now this is what we use," the student continued the explanation.

Once I was up to speed, I found the whole thing rather funny. And totally in the wheelhouse for this teacher. In fact, the trophy says it's a hall pass... 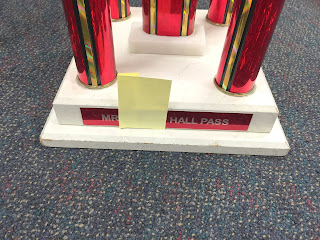 (The sticky note was my addition as I don't reveal real names on the blog.)

So, for the rest of the day, when a student asked to use the restroom, they wrestled this unwieldy thing out the door (the closed door, which is hard to open while lugging this), and then returned in a similar manner. The thing is taller than most of the kiddos!

There is a certain genius to this. They can't go gallivanting around campus with this behemoth in tow. And it's not like it's going to get misplaced.

I may have to tell other teachers this idea.

Generally, when kiddos ask to leave class, we write them a pass on a specific official pass paper. Some teachers have created reusable options so they don't have to continually write them. They are generally small enough to be easily carried. (Some teachers have a sense of humor about it. One teacher has a toilet seat. Another has them carry a toilet brush.) This trophy was unusual enough to merit a blog mention.
Posted by Liz A. at 8:00 AM