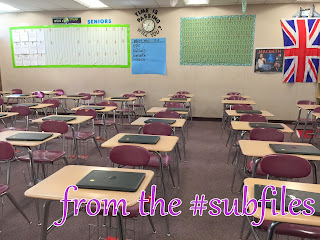 It was Friday. Twelfth grade English. The school is starting a study hall period, and this was the day all the teachers were to explain the concept via PowerPoint to the students.

This is new to me, too. We did not have study hall when I was in school. I have heard of it, but I've never experienced it first hand.

Of course, I was informed about all of this when I checked in that morning.

My job is pretty much winging things with no prep whatsoever, so I wasn't too concerned. I had access to the PowerPoint slides. I know how to work the in class projector and computer.

Yes, reading the slides to the students is dreadfully dull, but what else could I do?

So, the class came in, the slides were loaded, and the projector worked. I even had a group that sat quietly while I droned on. Success!

I was about five minutes into it when the door opened. In walked an assistant principal and a counselor.

Administrators walk in from time to time. They may be doing a dress code check or they may be looking to talk to a student for some reason. But this time they just stood in the doorway and watched.

Eeek. I didn't know I was getting graded.

I tried to up my game, but I was doing the presentation cold. And the slides were pretty detailed. There was nothing for me to add to make things more interesting.

The administrators were there for a couple minutes before they left. That's when I breathed a sigh of relief.

It is likely that they were making sure everything was working. But in my mind, I felt as if they were watching and judging. And I was sorely lacking.

We always judge ourselves way more harshly than the world sees us.

The administrators said nothing to me. So, I'm sure it was fine. It must have been fine, right?
Posted by Liz A. at 8:00 AM