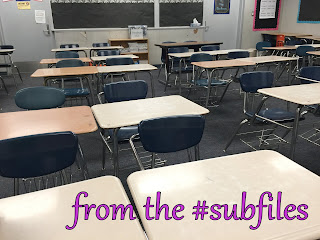 Seventh grade English. They were reading chapter eleven of The Giver and then answering questions about it.

The answering of the questions went much quicker than it should have. So, the kiddos had some time afterwards.

I sat and watched. They did the usual. And then I heard...

"Go back to Puerto Rico."

I headed for the two boys. I let the one who said it know that was a rude thing to say to his classmate.

"But he told me I needed to go back to picking cotton."

So, both of them were being awful. Yeah, that tracks for seventh graders.

I let them both know that was unacceptable. Because, seriously?

This is what happens when they have too much free time on their hands. It was my fault for not finding something else for them to do once they got finished.
Posted by Liz A. at 8:00 AM