I have not touched my mini iPad case in a while...

What mini iPad case, you ask? Yeah, it's been a while since I mentioned it. A recap:

Since then, I did crochet an edging. I even took pictures, which is hiding in some file or other. (I don't remember what I blogged about that week instead. Probably the donut.) 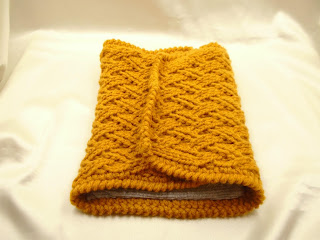 The above shot has the case folded up. That's what it looks like at the moment. On the inside... 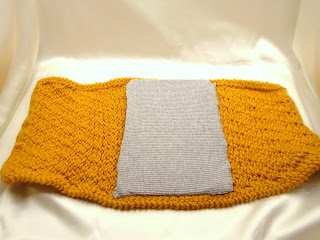 The gray is fabric that I sewed down. Inside the gray fabric is a posterboard backing (with duct tape along the edges to keep things smooth... 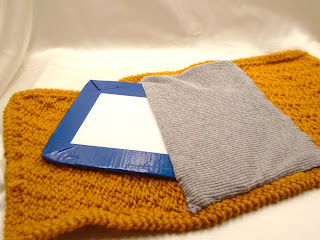 ...and a gap so that the posterboard can be removed in case I want to throw the whole thing in the wash.

The next step is to figure out how I want to position elastic to keep the iPad attached, and then to sew that down.

You can't tell from these photos, but there is a buttonhole on one edge, so I'll need to sew on the button as well.

I had thought of sewing in more of a lining, but I'm not sure if I'm going to do that now. I'll have to see how I feel after sewing in the elastic and sewing on the button.

As before, it's a work in progress. And it's been a bit too hot to think, so not much progress is being made.

Although, I had the brilliant idea of sewing in fabric that is as stretchy as the knitted fabric. Can you see the ribbing on the fabric? That means that the whole thing has a bit of give. It's lovely.
Posted by Liz A. at 8:00 AM