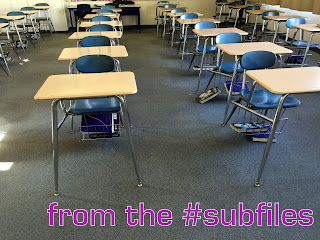 I'm not great at detecting lies, but sometimes the kiddos are obvious. Today's #ThrowbackThursday post is from February 22, 2008, but I remember it well.

I needed a silent room. I was not getting it. So, I warned them: "I will take down the names of those who continue to talk." This only works when I cover some teachers. This was one of them.

They fought me on it for a moment. I stared down the few whose names were going to be on my list. Then one of the girls (the talkers were all girls in this group) told me to write down her name. "I'm Amanda," she said.

Twenty minutes later (I had gotten my silence, so I didn't need to make my list) two other students were exchanging words. "Amanda, I have it here." The first student was talking to a different girl, not the one who claimed to be Amanda. I knew it!

After a quick perusal of the seating chart, I figured out who the fake Amanda was. Joanna. I was pretty sure. The two girls had probably switched seats.

Then someone called to the fake Amanda, calling her Joanna. I was right.

I don't know why they do this. I don't know what they get out of it. Today? They get honorable mention in my note to their teacher.

Ms. T recently retired. I miss her classes. She did not put up with this sort of nonsense. That girl was in serious trouble afterward.
Posted by Liz A. at 8:00 AM