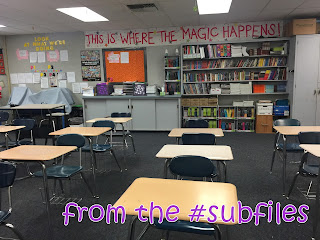 About twenty minutes into class, Rebecca arrived. She had an excused tardy pass from the attendance office.

I told her what the assignment was. (They were writing essays.) She said she'd already finished. Then she asked to go and see her counselor. I gave her a pass.

I've had Rebecca in various classes since she was in middle school. She can be a little irritating. But she's never made the blog before now.

She returned from the counselor after only about ten minutes. And that's the first time Rafael noticed her.

"You're late," he said. "Where have you been? Class is halfway over. You should be working on your essay. It's due tomorrow."

Rebecca turned to him and flipped him off.

And me? I told Rafael to mind his own business and get back to the essay he was not working on.

I'm supposed to call Rebecca out for inappropriate hand gestures and all, but seriously...

At the beginning of third period, Rafael grabbed a computer immediately. He had to start on his essay right away, never mind that there was a warm up he was supposed to complete first.

We argued. I pushed for him to do the warm up. He complained that he had to do his essay. We got through the warm up, no thanks to him, and then the class got to work on the essay. (He seriously wasted a good two minutes with his arguing.)

I meandered to the back of the room so I could see what everyone was doing on their computers. Rafael was busily typing an essay, right? Of course not.

Nope. Rafael spent the period avoiding doing the essay. He was staring into space. He was "doing research". We had another argument about him getting something done. He explained that he didn't need to be in the ELD class, he had the top A in the class, and he was resentful about being there so he refused to work. (Yes, those contradict each other. This is typical for a teen argument.)

So, when he noticed Rebecca (the second time she walked into the classroom) and went after her? Yeah, no. Nope. No.

Rafael was flabbergasted that I didn't say anything to Rebecca about her giving him the finger. But I had a few seconds only to offer my reaction, and I picked the more egregious behavior. And I stand by that.

Rebecca's response? When Rafael turned back to his computer, she gave me heart hands.
Posted by Liz A. at 8:00 AM