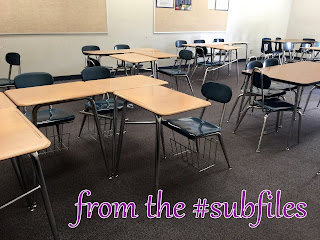 Last week was kind of crazy. On Friday I tallied up my week. I had covered for thirteen different teachers.

Normally, I cover a teacher a day. Each teacher generally has one preparation period. (Not all do. Some teachers have a class every period. And some teachers have extra no student periods.)

It used to be that I'd be asked to cover a different teacher on that prep period occasionally. Lately, it's more likely than not.

(The fact that we're currently experiencing a sub shortage is surprising. Last year at this time they laid off 55 teachers district wide. I was supposed to be worried that we'd have a surplus of subs as laid off teachers go to the top of the sub list. But most of them got called back to full time the first weeks of school.)

The remaining five teachers were the ones I had been called in to cover for the days Monday through Friday. (Chemistry, health, high school math, and eighth grade English two days in a row for two different teachers.)

Some of the highlights:

On Tuesday, Wednesday, and Thursday, I travelled all day. (I was covering special ed teachers who co-teach. It meant that there was another adult in the room. It also meant that I got to change classes like the kiddos all day.)