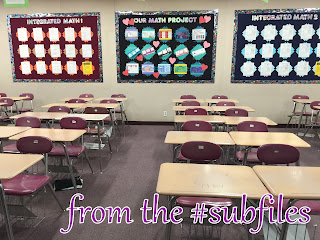 The whole district is adopting a new textbook that has an online component. When I covered that co-taught class a couple weeks back, one of the days the class was logging into the website for the first time. So, I wasn't unfamiliar with what the kiddos were doing.

The whole class logged in and got started on their test. Then one boy raised his hand. There was no test for him to access.

He explained that he had switched classes, so he was still enrolled online in the teacher's second period class. He logged into that, but there was no test there.

I don't have access to the teacher's view, so there wasn't a lot I could do...

It took me longer than it should have to remember that I could email the teacher.

(I mean, seriously, I email teachers all the time about the crazy that goes on in class. Why it took that long for it to occur to me that I could email her during class time... *facepalm*)

The teacher was on campus. She explained how the test was going to work to me before she left.

So, I sent the email and went about my business. I hoped she's answer me in a timely manner as to what to do with that one student. About the time I thought to check back with my email, the classroom door opened. Ms. J was back.

She conferred with the boy. I caught enough of the conversation to hear that she had him create a new account. Then she had to fly out to go back to whatever it was that was the reason she was out of class in the first place.

It took the boy several minutes to create the new account. And then... The test still wasn't there. Sigh.

By that time, there wasn't enough time in class for him to get anything done, so we just left it as it was. At least next time he shouldn't have any issues logging in. I hope.
Posted by Liz A. at 8:00 AM