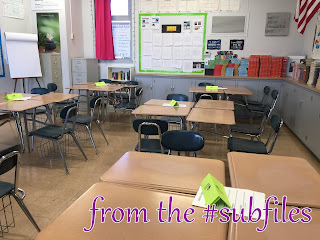 Four times a year, the district requires all the kiddos write an essay on a given topic. Each grade level is assigned a prompt and is given articles (and sometimes videos) to use as sources.

I was at the continuation high school. It was day two. (They get three days to write.)

Period one went much as I expected. I had to keep after kiddos who kept talking.

Period two went a bit better on the talking front. However, well, this is what I wrote in the note:


The good news: They stayed pretty quiet and I didn't have to keep after them whispering...
The bad news: ...because most of them were sleeping, so I had to keep waking them up.

Although, to be fair, it was the week after the time change. I was dragging myself. However, I'm sure we would have had a similar issue even without Daylight Saving.
Posted by Liz A. at 8:00 AM