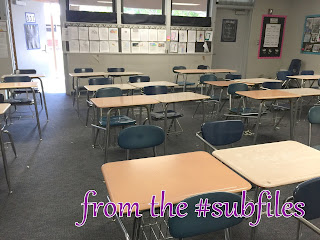 Seventh grade English. It was a Friday, so of course there weren't enough subs to go around. I was covering a math class for the rest of the day, but for fourth period, I ran across campus to cover this class.

As they were getting seated, I perused the lesson plans. I hurriedly passed things out because apparently they had a test, and we were late getting started.

(This is normal for covering an extra period. It takes security a while to get to the room to open the door. And then it takes me a bit to get up to speed while they settle in.)

I passed out the test. And they balked.

From what I could gather, they'd been studying how to figure out unfamiliar words using context clues. And by "gather", I mean that on the teacher's desk were papers indicating that they had been going over this concept for at least a couple days (if not longer).

Then, the instructions on the paper they had in front of them clearly stated that while the passage was in French, they should be able to figure out what information the questions were asking for.

(But nobody ever reads the directions, so...)

I mean, the first question asked how old the person in the passage was, and in the first sentence was the number 16. Come on! That's kinda obvious.

"But he speaks French."

The students pointed out a boy in the second row.

The area we live in, it's likely there are students who speak Spanish. There are various other languages that they may speak at home as well, considering the mix of ethnicities in the area. (Off the top of my head, I would not be surprised at Tagalog, Vietnamese, Korean, or Arabic. I know of one boy who speaks Russian.) While I would not expect French, it's not out of the question.

So, I did the only thing I could do. I turned to the boy.

"This will be really easy for you," I said.

And I made a note of this for the teacher.

As for the rest of them... It was a simple passage asking for simple information. And if they'd been studying context clues, it should not have been beyond them to figure out the questions which were in English.

But seventh graders react first and then think... Well, not second. Fifth or sixth, really.

Starting Monday, I'll be doing the A to Z Challenge. But you likely won't notice the difference.
Posted by Liz A. at 8:00 AM