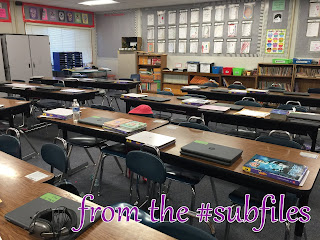 I was scheduled to go to the continuation high school for day two of a two-day assignment. I got a call in the morning telling me that they had to pull me. There were not enough subs to go around so I was being sent to...

I was not happy about this.

(I avoid elementary school for various reasons. They know this. I was not given a choice.)

But none of this was the fault of the elementary school staff or the students. And the fifth grade class wasn't too terrible.

We were midway through their math assignment. A student asked how long until recess.

I pointed out the clock...

Frequently in the middle school and sometimes in the high school when I point out the clock, the kiddos inform me that they "can't read" it. And I grumble and sigh. They seem to be perfectly content not knowing how to read an analog clock.

No, I don't help them out with this. They can figure it out.

So, when the fifth graders asked how long until recess, I figured we could go over clock reading.

The clock on the front wall was set up for learning to read a clock. (I'd think they learned that younger--I recall it being part of the curriculum in second grade--but I know from experience that they don't.) The teacher had posted the minutes on the outside.

I asked when recess was. They knew and said. I asked what time it was. I took a volunteer. We read the time off the clock. The student managed it. And then I had them subtract...

They were able to figure it out.

And now I know what I'm going to do next time a student informs me they can't read the clock on the wall, whether it be in middle school or high school. If they don't know their elementary school lessons, we can go over them again...
Posted by Liz A. at 8:00 AM