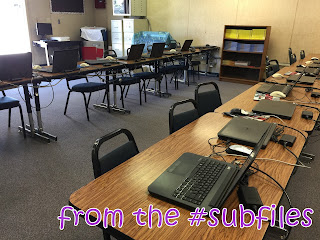 Winter break is over, but because I'm always posting last week's stories, I've pulled this week's posts from before the break.

And, as with all of December, I was again covering an extra period.

Which was unusual. This teacher had an emergency and had to leave early. (I heard it was a chipped tooth or something similar.)

For those keeping score, this gave me my second bonus day for the month.

Anyway, the class (there were like seven present) were busy watching their phones, mostly. They had a project, but most had already checked out mentally for the break. However, the room was dead silent.

So, I could hear Warren's entire conversation. It was all about his 22-year-old girlfriend and all the *ahem* things they did together. Yes, he was talking about sex. He was in the middle of relating one escapade when he looked up.

"Yes, we are listening. You can hear a pin drop in here. We can hear you."

Nope, that wasn't me. That was Jason. Jason M. No, not music Jason. (Music Jason is Jason C.) Jason M. is more of a gamer. (Certain names are popular. As I frequently have both Jasons in class at the same time, I am quite good at remembering which Jason is which.)

Jason M. was seated right in front of me. And I was grateful he spoke up. I gave Warren a glare.

"You might want to pick another topic," was all I said.

Warren didn't. He tried talking more softly, but the room was silent. I caught the gist of it.

All I could think was, why would a 22-year-old date a high school boy? (Warren says he's 18. I'm inclined to believe him. It's likely true.) Doesn't she realize that everything they do will be discussed with his friends? In class.

Probably not. If I knew who she was, I'd give her a heads-up.

My email to their teacher was short:


Yeah, so they didn't do a whole lot. No issues other than that. Although, we heard way more about [Warren's] sex life than I care to know. (He's dating a 22 year old.)

His reply was about the same:


Wow...ok thanks for the heads up...I will talk to them

And revenge is sweet. I did warn Warren to find a different topic. If he's okay putting his business on front street, I'm okay letting Mr. A know that's what was discussed in his absence. (If Mr. A embarrassed him, all the better.)
Posted by Liz A. at 8:00 AM