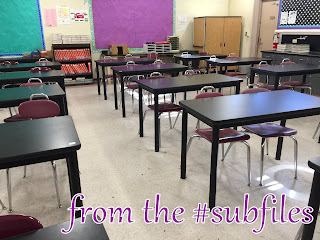 We are currently on winter break. But I had a few left over posts from the last couple weeks, so I thought I'd share.

"Martin, don't stick a fork in the outlet."

Martin: "It wasn't a fork. It was a pair of scissors."

Biology. Mostly students who do their work. But Mr. V had warned me that his fifth period was "special". The last time he had had a sub, the scissors incident happened.

The rest of the class had a vested interest in Martin being a good citizen. Apparently the consequences of his deed were shared by the class in general.

Martin, wisely, chose to sit in the middle of the room, away from the walls and outlets.

It was while walking the room that I got a chance to check in with Martin. He wanted me to know that he hadn't stuck the scissors in the outlet. He just stuck them around the outside.

When I questioned him as to why, he told me he had been bored.

Bored? He had an assignment.

This is when he admitted to having a 36% in the class. He turned in no work. (That he isn't at a full zero is all due to classroom participation points.)

Martin lamented that he'd have to take summer school to make up for the semester. It's a four-hour class. He's not looking forward to it.

I can't help but think he probably should have considered this way earlier in the semester. And perhaps, I don't know, actually do and turn in his classwork. Perhaps then he wouldn't be so bored that he'd entertain himself by sticking a pair of scissors in an electrical outlet (or around the outside--whatever).
Posted by Liz A. at 8:00 AM