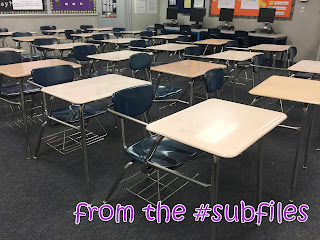 Winter break is over, but as I didn't work last week, I'm posting stories from the week just before the break.

The call came late. An hour prior, I saw no call and I figured I wasn't working. It was Monday of finals week, so I was not terribly shocked to not have an assignment.

The call came at the time I should have been getting into my car, so while I accepted the assignment, I let them know I'd be late.

I got to the school about a half hour into the school day. The office was empty of all except the receptionist. Everyone else was out at the fire drill.

Score! I missed the fire drill!

The office staff returned, and I checked in. The teacher I was covering had first period off, which meant I had missed nothing being late. And I had about two hours until my first class. (They were on a block schedule for finals.)

I got into the classroom and got set up for the day. I was enjoying the first prep period I'd had all month when the office called. Could I go and cover another class? Naturally.

I arrived at the silent class (about an hour into the block). They were in the middle of their final. The teacher had no idea what I was doing there.

He called the office. It turned out there was an IEP meeting he didn't know about.

Some days just go sideways. I guess I was due for a weird one.
Posted by Liz A. at 8:00 AM