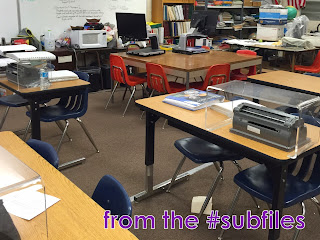 Actually, to be fully correct, this post should be titled "Connect Four for Students who are Visually Impaired", but that's just too long and unwieldy...

I covered one period of the visually impaired class while the teacher was at an IEP meeting. And we managed to get through their entire assignment with twenty plus minutes left to spare.

I asked what they do normally when the lesson runs short. They said they played a game the last time. The instructional aide suggested Connect Four. (There were two students in class.)

In case you were wondering (I was), someone had drilled holes in all the black checkers, so one could tell by touch which checkers were which.

The two girls played one game that finished very quickly. They said they were bored with it.

Really? Bored? That tells me that they weren't doing it right...

So, I sat down with them and went about teaching them a bit of strategy.

As a child I played many strategy games with my father. (Chess. Pente.) And he was merciless. (He still is.) He will place pieces in ways meant to confuse and distract me. I learned from an early age to pay close attention, think several steps ahead (what could he possibly do next? where could he win that I'm not seeing?), and never let my guard down.

After the first girl played her first checker, I talked each girl through her move. What should she look out for? Where could she win? Where could she make an error to let the other girl win? I explained how to think two to three moves ahead.

I have no idea if either learned something. That second game took considerably longer than the first. And then it was time for them to go.
Posted by Liz A. at 8:00 AM