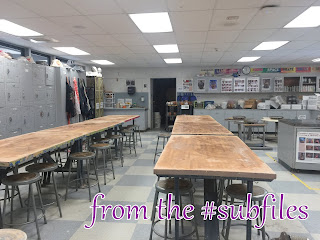 It was one of those lovely days that I don't write about. Ceramics. The kiddos were pretty much on task, and my biggest concern was staying awake.

At the end of the period, they went to the sinks to wash the clay off their hands. I was seated next to one. I happened to look over as one boy was washing his hands...

I've been subbing a while. I knew this boy. I'd had him in class several times in the past. He's never made the blog before. He does his work, mostly. He's never been rude to me. He's like 75% of the students I encounter. (Yes, mostly the kiddos are pretty good.)

Anyway, I looked over and noticed... The boy had no thumb on one of his hands. (I think it was the right hand, but at this point I don't recall precisely.)

And all I could think was: how had I never noticed this before?

This boy's a senior. I've probably had him in classes for five years, if not six. I've passed him as I do class walk arounds. I've passed papers to him and had him pass papers back to me. I've called his name on the roll (or asked his name as I did a reverse roll call).

And I never noticed?

Wow. I really need to be paying better attention.
Posted by Liz A. at 8:00 AM