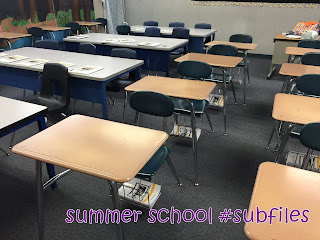 The week of the 4th of July was a holiday week for the summer school. This incident happened two weeks ago...

Ninth grade English. They were writing a 300-word story.

As there was no seating chart, I took roll the "reverse" way. That is, I walked around the room, asked each student their name, and then marked them present on the class roster.

The office had given me updated rosters when I arrived.

Summer school has a strict attendance policy. They can be absent twice. On the third absence, they are dropped from the class.

I got to the end of the room. The boy gave me his name. It was not on the roster...

"Does that mean I can leave?"

Me: "Have you been absent three times?"

Oh, he was so excited. It was like he had won the raffle. "I'm done." He was packed up and out the door so fast.

Of course, he had enrolled in the class because he needed English 9 credits, which he'll have to make up at some point. So, not really a victory.

But that was one less student in the class.
Posted by Liz A. at 8:00 AM