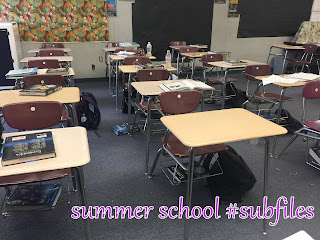 U.S. history, second semester. It was the last block (two hours) of the day. I had a class of fourteen. They had bookwork, and they spent the time in near silence.

Mostly they appeared to be working. Well, except for two boys who had their heads down on their desks.

It seemed to be one of those days that don't make the blog. Until...

End of the day. They packed up and left. I had taken the turned in work and stacked it neatly in one pile and left it on a desk at the front.

I was finishing packing up my stuff when I noticed I still had one straggler. He was one of the boys who had been asleep. For a moment, it looked like he was going to slide his paper into the stack, so I went about my business. (I don't consider the work late if they turn it in as they leave. If he had handed it to me right then, I would have put it in exactly the same spot.)

But, instead of sliding his paper in, he pulled another paper out. And then he was busily writing something...

I shooed him away. He had only managed to copy one answer, leaving two full answers on his paper. (He had done one on his own earlier.) He sought about for a good lie, but he couldn't come up with one.

Student logic. He had slept for much of the two hours, and he figured he could make up in the work in what? Five minutes after class? Seriously?

Of course, this didn't take into account the other three assignments for that day. (He was copying the worksheet, but they were also assigned four questions from the book and an outline of the chapter.)

Perhaps I should have let him copy. The page he had pulled? It belonged to the other student who had been sleeping.
Posted by Liz A. at 8:00 AM