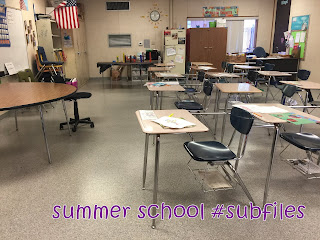 It was one of those special ed classes--you know, the ones where the middle school age kiddos can't read. Their summer program is a three-hour day where they do a little reading, a little math, and they paint paper towel rolls to make rainsticks out of them.

There's always that one student who we have to keep an eye on. For this group, her name was Sophie.

Sophie liked to hit. She would also run. (She only ran once this day.) But for the most part, we got through the day with few issues.

Until clean up time.

Everyone else in class had packed up. They sat in their seats, waiting patiently to be dismissed.

Sophie decided she wanted to explore the teacher's desk. She had to touch everything, including the expensive electronic tools like the document camera and the copier. And it was less of a touch and more of a pounding...

Nothing any of us did could get her to leave the teacher's desk and go back to hers.

So, Ms. R decided to try another tactic.

"Everyone who's sitting at their desks gets chips."

Ms. R grabbed a bag of chips and gave everyone else a handful. The other kiddos got down to munching. Sophie appeared not to care, but she left the teacher's desk and went to sit at hers. For a bit.

Victory. For a moment.

(Sophie wouldn't leave the room at dismissal time. The only reason she's not still there is because one of the instructional assistants went to the parking lot and had her mother come in and take her out.)
Posted by Liz A. at 8:00 AM