I finally have a finished object to show off.

There's no new news on the bedroom front. We're still waiting on the contractors to fix the hole in the ceiling. I've been in my bedroom for almost two weeks now, although most of my stuff is still sitting in the dining room. Sigh. It's good to be somewhat settled.

I present the walking purse... 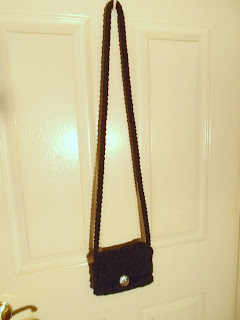 In the first blog post where I mentioned it, I was asked "what's a walking purse?", so I felt I should explain.

My father and his wife go for walks pretty much every morning. (Well, barring illness or injury.) They walk for an hour or more.

Several years ago, my father's wife requested a small purse for these excursions. She wanted something big enough to hold her phone and a couple other odds and ends. She wanted it small so she wouldn't be tempted to put anything else in there. And the strap needed to be long enough so that she could wear it across her body.

I made that purse several years ago. It's gotten a lot of wear. Now it's time to replace it. (I know I wrote about it on this blog at the time, but I can't find the post.)

So, I put on my designing hat and got to work. I wanted something a bit more durable. I knew what yarn I wanted to use (and it helpfully went on sale just in time for the project). I ran a few ideas by her. I got most of the pieces done.

And then water poured out of my ceiling, and my projects all kind of stalled.

As things got put back together in my room, I got more work on my projects done. And this week I finished the purse. 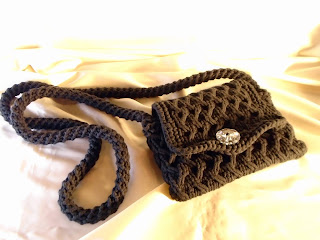 It was nice to have three hours to sit in front of the TV and just assemble things. Because I lined the purse (that took a bit of time) as well as attaching the purse strap and button and such. 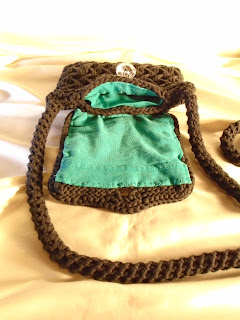 There are a few changes I'd make to my next attempt. I already outlined those in another post. And the question is whether the phone will go in and out of this purse easily as I stitched up the top just a bit. (There was an issue of stuff slipping out on a previous purse.)

But for now, it's done. That's one more Christmas present finally finished. Only four more to go... 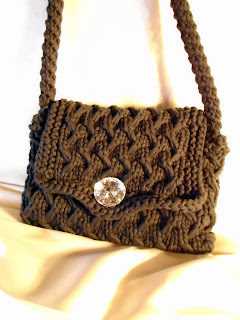