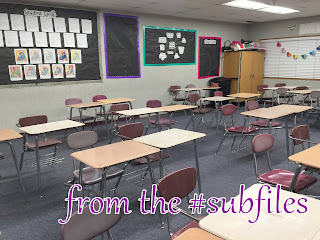 Seventh grade math. The lesson plan warned that the classes had been difficult (this was accompanied by an apology), but I was to have a co-teacher.

Of course, not thirty seconds after reading that, the phone rang. It was the office informing me that my co-teacher was also out sick, and a sub for that co-teacher had not been ordered. I begged the secretary for help. I knew I was going to need it. She said she'd see what she could do.

First period I wasn't to have a co-teacher. I muddled through, but it was as bad as advertised. Second period was the teacher's prep (and I went elsewhere to cover an extra period). Third period I returned, expecting more of what I had had in first period.

The bell rang, and I fought for attention. That's when another sub showed up.

She was so helpful. I went over what they were to do, and Ms. F clamped down on them.

The kiddos were working. They were even nearly silent. All was well. Until the phone rang...

On the way over, Ms. F had fallen, and she was a little sore. (It was raining out. It's slippery. And she had come from across the campus.) This had been reported to the office, so they called to have her come to the office to fill out an incident report.

I found this all out later. While Ms. F was on the phone, another teacher walked in. She had been called to cover, but finding two subs in the room...

It was a bit chaotic. Once I realized that Ms. F was leaving, I assured Ms. E that I did need her help. It didn't appear so as the kiddos were quietly working, but considering how much effort was needed to get them there, I didn't want to risk losing the help.

Third period was totally lovely. (Well, not totally. They got a little crazy at clean up time. Par for the course with seventh graders.) But Ms. E had her own class to get back to, so I was left alone for period four.

Alas, no more subs arrived for the rest of the classes. I was alone. And things didn't go well. Not at all.
Posted by Liz A. at 8:00 AM