Mr. R and the Kiss Concert 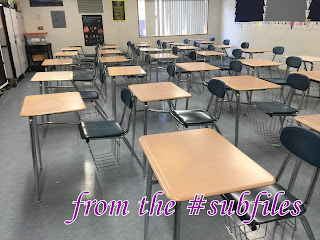 On Wednesday the lesson was about triangles, the triangle midsegment theorem, and such.

Mr. R did his lecture as the class took notes. There wasn't much for me to do but sit and watch.

And sitting and watching can get boring, especially when I wasn't learning anything new. I was really wishing I could take a nap.

Then, at a break in the lecture, when the students were busily copying down the notes and working a problem on their own, Mr. R stopped to talk to me.

He told me that he was a bit wiped out as he had been out late the night before. He wouldn't normally go to a concert on a school night, but it was Kiss. And they were playing close by enough. He hadn't gotten to bed until after midnight, so getting up for school had been hard.

Little ol' me who had gone to bed at a reasonable hour the night before really shouldn't have been tired. Mr. R getting through that lecture... That day, he was the rock star.
Posted by Liz A. at 8:00 AM