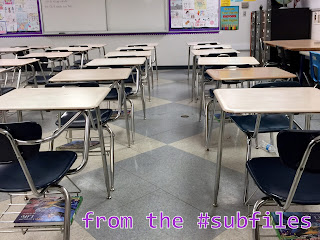 Seventh grade science. They had a test.

This teacher had assigned a couple students every period to be test helpers. Their job was to pass out tests and then to organize the tests after they had been turned in. And most of them did a pretty good job. (It's early in the school year. They'll get better.)

(I know the drill. I covered this teacher for four? weeks last school year.)

Each student got a "test" and an "answer sheet" (a Scantron page to fill in the multiple choice answers). The tests got reused every period. To make sure they all got returned, they were numbered. That makes it easy to see if one is missing.

So, the test helpers were to put these back in numerical order.

The first thing the 4th period helpers did was to take my nice, neat stack and turn it into five or six piles of chaos. Their method made no sense, but I figured they had a plan.

Turns out, I was wrong.

At the end of 4th period, the helpers handed me the stack of tests. Initially, I thought just a couple tests were out of order. But then I took a closer look.

(4th period was right before lunch. By the time I'd taken a closer look, the kiddos were all gone.)

I don't know what order they were going for. It would be one thing if they just weren't in order at all. That I could somewhat understand. But this?

I took a picture to send to their teacher because I couldn't not share... 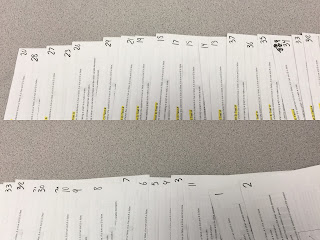 As I told their teacher, those helpers either need to be retrained or replaced. Although, I think there's hope for them. Probably.
Posted by Liz A. at 8:00 AM