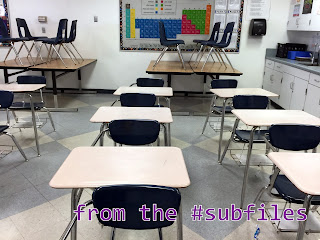 They delivered them while I gave period one my opening remarks. A bunch of helium-filled blue balloons. I was covering an 8th grade science class. And all of their eyes went wide.

"What are the balloons for?"

I tied the bunch to the back of a chair. No way was I going to deal with those yet. Experience has taught me to pass those sorts of things out at the end of the period.

Still, periodically, someone would ask, "What are the balloons for?" And I would reply, "We'll get to them at the end of the period."

The balloons were a reward for the kiddos who had done well on the state testing last spring. The awarding of the balloons turned into a nice little ceremony.

I read the explanation of what the balloons were for. Then I called names. Each student came up to retrieve their balloon. The class applauded each recipient. It went very smoothly.

And then the bell rang.

Passing period. A student returned. "Howard knocked Amber's balloon out of her hand, and it flew away."

And so it began.

Second period the balloons were everywhere. A couple came loose from their strings. I retrieved one from the ceiling. (I was tall enough to reach. The student was grateful.)

Fourth period a couple girls came up with a game. Balloons mysteriously floated to the ceiling. The girls were cutting their classmates' balloons loose. (They did not have balloons of their own. And Andie was in that group.)

By sixth period, there were far fewer balloons. One boy walked into class with his balloon's remnant. Tied to a string was the bottom of a popped balloon. It looked rather sad as he tossed it over his shoulder as if it might fly again.

Yeah, that went about how I expected it would. Talk about an ephemeral reward!
Posted by Liz A. at 8:00 AM