Punishment, Unusual and a Little Cruel 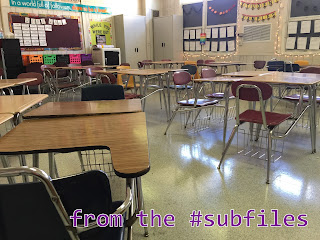 In the first year of high school math, certain students who are struggling are given an extra period of what is called "math support". All the struggling students. Together. In one period.

This is how difficult classes are constructed.

But, I had two things going for me on this day. One: I had fair warning from the teacher himself and his co-teacher (who had taught all the previous classes that day). Warning and support. And two: another teacher "helped out" (read: did all the work) with the class.

One of the warnings I got was a little trick the teachers used to keep the class in line. Turning on the air conditioning was contingent upon the class' behavior.

I know many parts of the U.S. are getting into fall temperatures. However, I'm in southern California. On this day, our high was projected to be in the upper seventies. (Roughly 25 C.) With it being a sunny and warm day, and us being in a classroom with no open windows, the room got fairly warm. I had been running the a/c all day.

But, with the warning, I turned off the a/c before this class came in. (This class was immediately after lunch.)

Class got started. The other teacher who "helped out" showed up. (There was some question as to whether or not she'd be there on this day. As it sounds like she's doing this extra on her own time, I wouldn't have blamed her for not coming in.) I passed out their assignment, and they got to work.

Slowly, the temperature in the room crept up. And someone asked me to turn on the a/c.

The other teacher then used the a/c to her advantage. She informed the class that everyone had to complete two problems before she'd turn on the a/c. Several students had completed way more than two problems, but several others hadn't even written their names on their paper.

It took at least five minutes (maybe ten) before the stragglers finally finished their two problems.

I was urging them on. I run warm generally, and I was already dripping sweat. (This is normal for me.)

The class was still loud. Several only got those two problems done. But, that class could have gone a whole lot worse. I'm going to have to consider using the a/c to my advantage in the future.
Posted by Liz A. at 8:00 AM