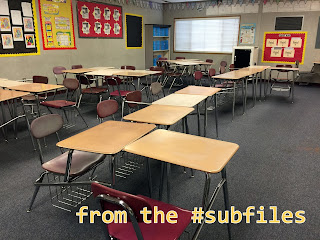 Seventh grade math. Their assignment was a review packet for an upcoming test. And because they were seventh graders, I spent most of my time trying to keep them settled.

In a class of seventh grade crazy, Jairo stood out. Literally. He refused to sit for much of the period.

So, when with 15 minutes left of class Jairo had packed his stuff up and was ready to go, I noticed.

I informed him that he still had time to get work done. It wasn't clean up time. And he'd better get his work back out and do... something...

He ignored me. He told me he was going to do it for homework.

(At this point, I normally would have made the assignment due right then, but it was a test review. Plus, there were enough students on task, and it wouldn't have been fair to them when Jairo was the only one being difficult about doing the assignment in class.)

Luckily, this was the last class of the day. If he wasn't going to work for the last 10 minutes of class, I'd have him stay 10 minutes after school.

Jairo unzipped his backpack. I prompted him to keep going. He thunked his binder onto the desk. Right direction, but not complete. He opened his binder.

Yes, I had to prompt him at each step. Then the assignment came out, but he said he didn't have a pencil.

There was no work on the paper, but his name was at the top, and there were various doodles in spots. Clearly he had had a pencil. He began a convoluted story of how he had borrowed a pencil from one student for one thing and another for...

Okay. Fine. He would have to remain in class until he finished one problem.

Immediately, Jairo opened the front pouch of his backpack, produced a purple mechanical pencil, and filled in an answer on his page. (A correct answer.)

It's amazing how he put so much effort into resisting doing anything constructive. If he were to apply that single mindedness to work for him...

Too bad I didn't ask Jairo for five problems.

If something seems different today, it is. Monday is usually the day I post my latest knitting or crochet project (although lately I've just been posting the new pictures I've been taking of older projects), and my subbing stories I post later in the week. However, as of "press time", I had no new projects or pictures ready to go for the blog, so rather than going dark like I did last Monday (due to the same issue), I'm rearranging my schedule for this week. I should have some pretty pictures for Wednesday 🤞.
Posted by Liz A. at 8:00 AM