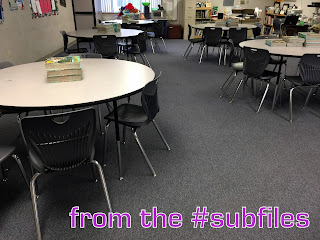 Friday was a weird day. I got what is called a "roving" assignment. It was a training day for the English teachers. But instead of having them out all day, they split the group in half so half were out for the first half of the day while the other half were out for the second. And since the teacher I was covering the first half of the day had a 1st period prep, I was sent elsewhere for that period.

Which is why when I walked into the class I was covering 2nd period, I was not surprised to find the computer set up with the class' assignment.

The class had vocabulary words to copy down. This is something they do every day. All I had to do was turn on the projector.

Well, ideally that's how it would have worked out.

When I got into the room, I found a countdown clock on the computer. I had less than ten minutes before it was going to shut down.

I know this drill. The computer uploads updates. Then it tells you it needs to shut down. But you can postpone that. So, that's what I did. I told the computer to postpone shutting down for four hours.

The only other trick I know is to shut down the computer. Which is what it was going to do anyway.

Unfortunately, it was going to take the vocabulary words with it. And I didn't have the teacher's log in, so when the computer restarted, I would not be able to access the teacher's files.

In the end, I could not stop the forced shut down. The students had maybe five minutes of the eight to ten that they needed to copy down the words. And with no other choice, I then just started them on the assignment for the rest of the period.

It was a freshman class, so I had the usual freshman problems. The teacher's computer finished restarting. And then I could log in to the computer under my log in.

And it turned out that the teacher had a back up for me. She had printed out the words (as well as the words for the next class), and her document camera was connected. So, I set that up, and about halfway through the class, we were able to complete the vocabulary that should have been done at the start.

With that technical difficulty out of the way, I had no issues with the computer for the next class.

These are the joys of subbing. Unexpected issues always seem to crop up.
Posted by Liz A. at 8:00 AM