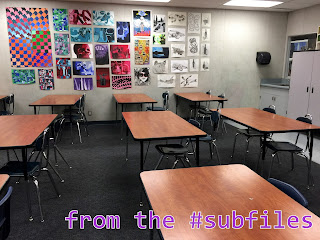 A middle school art class on a Friday. It didn't go that badly, considering.

Some kiddos are just oblivious. The bell had rung. I was trying to start class. But Andie wouldn't get in her seat until other students pointed out that that's what I was hinting at. By saying, "Okay, class, let's get started."

Yeah, Andie was an issue. And apparently a well-known one to her teacher. Mr. S had left names of those I should "keep an eye on". Her name was at the top.

On this day, Andie decided that she just had to watch the cheerleaders.

She was astounded by them. She could see them practicing though the window, but only if she was standing right in front of it. And she had to watch them.

I've been subbing a while. The cheerleaders practice in the same spot every day. And they continue to practice after school. They did this last year. They're doing the same thing this year.

While it may be the beginning of the school year, we're a good month in. Football season is well underway. I'm certain the cheerleaders have been there every other day that I wasn't the sub in this art classroom. So Andie's arguments don't hold water.

And yet she did everything she could to get back to that window at every opportunity.

Middle schoolers. They obsess about the strangest things.
Posted by Liz A. at 8:00 AM

Email ThisBlogThis!Share to TwitterShare to FacebookShare to Pinterest
Labels: #subfiles, 8RE, about a student, difficult student, middle school, substitute teaching