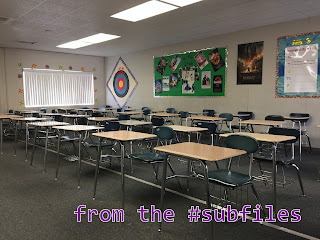 We're now officially into the school year. We've hit the days where there are not enough subs to go around. This means extra work for me. 😎

I was, of course, expecting the phone call. Could I work an extra period? Of course. And then she told me the room number.

Yup. That's about as far away from room 919 as you'd expect.

Sometimes the secretary will tell me who the teacher is or what the subject is, but not this time. However, I knew already. It was a Spanish class. But this teacher has various levels of Spanish. So, I didn't know quite what I'd be walking into.

As per normal, we got into the classroom after the bell. I went looking for the lesson plans. Found them. And then I learned what class I'd be covering.

I did a mental jig as I read that. The class cheered when I told them their test had been postponed.

(I could have ended up with freshmen in Spanish I. They would have been a challenge. But Spanish IV--and AP to boot--contains the kiddos who have chosen to remain in this elective. The kiddos who actually like the subject. The good kids.)

Some days I just luck out. It was that kind of week, actually. Well, until... (Check in tomorrow. That day was more "interesting".)
Posted by Liz A. at 8:00 AM