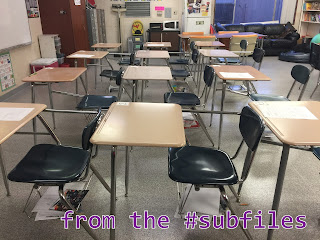 Tuesday and Thursday of last week I covered a "severe" special ed. class.

Rather than go into a long-winded explanation of what that means, let me reference some previous posts. Two weeks ago, I wrote about the class that these kiddos will go into once they've aged out of the high school. And I pretty much had the same group at the end of the school year when they were still in middle school (so, June 2016). (In fact, Kenya, Brittany, and the boy Kenya had a crush on were all in this class.)

Tuesday things went pretty well. And if that's all there was to the story, this wouldn't have made the blog. I figured Thursday would go similarly. In fact, when I arrived, the lesson plan for Thursday was pretty much identical to Tuesday's. (The math problems were of the same type, but different examples. The grammar lesson had different questions. The reading assignment was a different page. But otherwise, we did the exact same thing.)

But when class started, I was all alone with the class.

These types of classes always have instructional aides. The IAs know everything, and I lean on them heavily. This class was supposed to have two IAs with me in first period. And yet...

Luckily, I knew the drill as it was the same as it had been for Tuesday. We did their "journal" (which was a math problem... a story for another day). And then it was time to deliver coffee exactly the way they had done on Tuesday.

About the time we were getting ready to leave, an IA showed up saying that she had been sent to fill in. And while we were delivering the coffee, another sub arrived to help out. (He was actually a substitute teacher like me. The class he was supposed to cover turned out to not need a sub.)

By second period I had full IA coverage. But, opposite what's usually the case on these days, I was the one who knew what was going on in the class and I was directing the others in what to do.

Somehow we got through the day. (I did have one regular IA, but she worked the last three periods.)

When I was getting the assignments for this week, the sub caller almost gave me a different teacher for Thursday. When I realized that I could cover the same teacher on Thursday as I did on Tuesday, I made sure to request that placement. I shudder to think what would have become of another sub walking into this without the backup I had had on Tuesday (with IAs who guided me through the day).
Posted by Liz A. at 8:00 AM