Getting Back Up to Speed 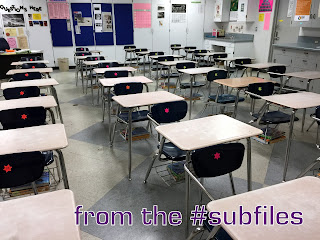 Winter break was over. I got an early morning wake up call. Guess who would be out another week?

I was not shocked by this. The teacher I covered before the break had been out due to shoulder surgery. I half expected her to need more time to recover. So, back to it, the same group I had before the winter break.

The teacher was prepared. She left lesson plans for the entire month of January, just in case. So, I knew we were covered. The first day back, they had an assignment in their packets.

All the classes received packets for the unit. The first pages were fill-in-the-blank notes. Then there were pages of various assignments that they would need to complete. These packets were passed out the first couple days I was in the class. They all had them.

After the initial explanation that their teacher would be out another week, I told them to get out their packets...

I was not shocked. I wasn't even surprised. Since they came to school with their binders and folders and backpacks and such, I figured the packets would have to be in their stuff somewhere. Presumably, it would be with the other school stuff they hadn't looked at in two weeks. (They didn't have homework over the break, so they shouldn't have even needed to take it out of their backpacks.)

Most managed to find their work, and we got underway. Well, except for one notable exception. Blaine.

"You never gave me the packet."

Um yes, yes I did. And you know how I know? He had scores recorded for assignments that were in the packet. Which he couldn't have done if he didn't have the packet.

But he protested he'd never received it. This went back and forth for a bit. Until he realized, "Oh, that packet."