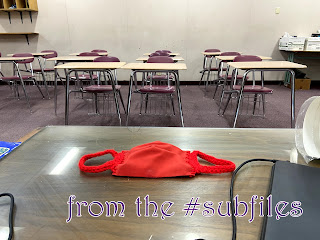 Last week I was still covering the vacant special ed position for co-taught classes. And last Monday the internet didn't go out. Yay!

Mondays are our weird day. When we were in person, that was the day when we started late (so teachers can meet weekly). So, in the distance thing, this is the day where all classes meet for 25 minute periods.

(The rest of the week, the classes meet for an hour, but only three classes a day. All six meet on Mondays. The rest of the "school day" is set aside for "asynchronous" work, a.k.a. homework, which is kinda awkward phrasing being as all their work is at home now.)

Because Mondays are short, Ms. S, the math teacher, has them play Kahoot to review.

Kahoot? It's an educational website where teachers can create online quizzes that are played like a game show. It's fun.

Fifth period. Ms. S brought up the Kahoot site, gave the kiddos the PIN, and had them sign in.

When the kiddos sign in, they create a user name for that particular game. As they are eighth graders, they have a tendency to create some odd names. Ms. S was less concerned with that than being able to identify the students (she gives them points for participation), so she asked them all to use a name that she could recognize and use to link back to the student.

One kid used KK, which were his initials. There were two possible Mickies (a Michael and a Michaela), but the other used his full name. One girl used letters and symbols to spell her name, but it was still recognizable as her name.

Ms. S can deny students entry by deleting names. The kiddo can resubmit so long as the game hadn't started yet. So, I wasn't surprised when Ms. S deleted a name and reminded the kiddos to use appropriate names.

I wasn't watching the names, so I missed the name that made Ms. S explode.

She's a fairly laid back teacher. It was game day. But one kiddo tried to use "Daddy" three times.

They always try to sneak something by. She denied that kiddo once and warned them. Then they tried again. She deleted. At the third try, she stopped Kahoot and gave them all an assignment to do.

Because seriously? No 13-year-old should go by "daddy".

Ms. S has told them no Kahoot for the entire school year until the student in question fesses up. It's been a week. Still no confession.

We have a suspicion of who it could be. There's a possibility of two students. Perhaps they'll come forward eventually.

Luckily, sixth period went off without a hitch.