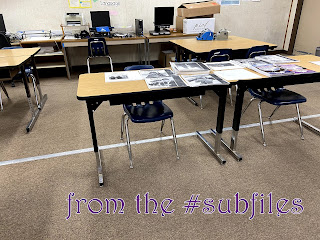 With my long term assignment complete, I immediately went right back into day to day subbing. Yeah, I was surprised, too. I had thought I'd take a day or two to just be, but no, the sub caller had assignments for me.

My first class back was the visually impaired class.

I suppose I should back up a bit, considering how different things are this year. First, I'm working from campus. Some teachers are working on campus while others are working at home. But we subs have to come to campus to check in and get the access to the classes we need.

I checked in, got a computer, and I got logged into the Google Classroom for the teacher I was covering.

So, like I said, it was the visually impaired class.

I had one student for two periods. Sienna. In the first class, we did English. In the second, we did math.

Her sister logged her into our video chat, conference call, meet, whatever you want to call it. Sienna had her brailing machine out. We read a story for English class. For math, Sienna had two math "worksheets" to complete.

I read Sienna the problem. As per the lesson plan, I asked her what operation she needed to perform to complete the problem. She told me. Then I asked what numbers we needed, and she responded with those. Then she needed to do the actual problem, and she used a calculator to do it.

This voice had a bit of an accent. Well, it was rather pronounced. The dude sounded very, very British.

Does the calculator have a name? I imagine it would be something very British, like Clive or Nigel. Does he like math? He really hits those fours and sevens. Does he only say the single digits? I think I heard other numbers for the answers, like seventy-seven and ninety-four.

And mostly I wondered if it was a British calculator or if it was one of those where one can choose the voice.

I didn't get a chance to ask Sienna. We were kind of busy doing her assignments, and then her sister shut off the meet once we had finished. So, this is just going to have to remain a mystery.