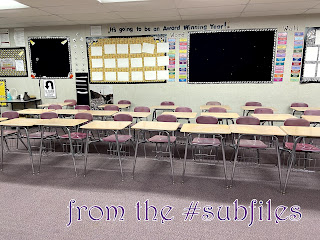 School has gone virtual. So, what's the one thing you don't want to have happen during the school day? I mean, besides a power outage.

Monday. First period went rather smoothly. We logged out. (There's a ten minute gap between classes. Each period has it's own meet code that's embedded in Google Classroom, so we don't stay in the same meet all day.)

About five minutes before period two, we attempted to log into their meet. This should have happened with no issues. . .

We almost had it. I got my camera starting, but I never got fully into the meet. Ms. W didn't even get that far.

But somehow, I still had Google Classroom (which I had opened before this). A student questioned where the link for the meet was. I managed to respond that we were having internet issues. At least, I hoped it posted.

And then the internet was gone. From what we gathered later, it was probably a district-wide outage. And it didn't get restored until after the "school day".

Ms. W ran home and taught her last two classes from there. As a sub, I was kind of stuck on campus, although I probably wouldn't have made it home in time for the end of the day classes, anyway. (I texted Ms. S to let her know what was happening. She was teaching from home, so she was able to continue, no problem.)

The next day, the internet was restored. It was rather entertaining to go into Google Classroom and see all the questions on the stream. Ms. W had posted their assignment before school, so they had work to do. But I rather doubt they did it. They were questioning where we were and was class cancelled?

Alas, unlike Google Meets in the business world, in the education side, there is no way to call into a meet. (I know. I checked.) Deep sigh.

Fingers crossed we don't lose internet again. But it was giving us issues all week. Sigh.