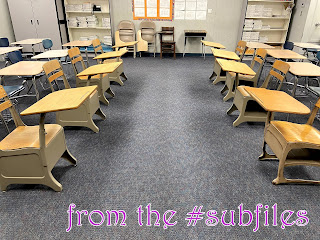 Last Friday, I covered an eleventh grade English class. They had a quiz.

Substitute teaching during a pandemic is a strange mix of the familiar and our new reality. I know all the staff in the main office. I haven't seen them since everything shut down, but it was mostly the same, except we're only allowed to enter and exit through one door, and there are Plexiglas partitions up to shield the receptionist.

There were administrator changes because new school year. I checked in, and then I had to check in with a new assistant principal because she had to give me access to the Google Classroom classes I would need for the day.

Oh, and the masks. We're all wearing them, but oddly, when we interact, we make no mention of them.

Once I had checked in, I headed for the classroom. The campus feels like a ghost town. There are people there, but not many, and I can feel the emptiness. Various reminders that we went home on March 13th and didn't return pop up. The ASB calendar of events wall outside still says March. And the classroom I was in still had the minimum day schedule posted.

The teacher I was subbing for had not returned, although he was due to work the following week. That is why I was there. The sub who'd been covering his class was taking over another long term position, so they needed someone to fill the day.

At the appointed time, the students logged in. A couple arrived at first, and then the whole rest of them started populating the screen. Only nine were visible, but the list of the 30-odd students was on the side. They immediately muted their microphones. Some turned off their cameras, but a few kept them on.

(One girl in fourth period kept her camera on the whole time, but I don't think she realized it. She was clearly having a conversation with someone, and they were having a grand old time. Some dancing was involved.)

As they had a quiz, all I had to do was announce it, and they got to work. And I watched a mostly blank screen. (They are required to have a certain number of minutes "in class", so they had to remain in class even once they'd finished the quiz.)

I had a chance to talk to the previous sub between classes. (There's a ten minute pause between each period.) He said the classes were fine, although sixth period could be weird.

So, sixth period started. And the names popped up on the screen. Names I recognized. Now, I recognized most of the names in the first two periods (they're only doing three periods a day), but sixth period names were different. I mean, not most of them. But about six or seven of them I remembered from previous interactions, and not in a good way.

And all in the same class? Yikes.

But, they're juniors now. As middle schoolers, they fought me. Now, they make a joke out of things. This is an improvement. We won't have the battles. But getting through material can easily go sideways.