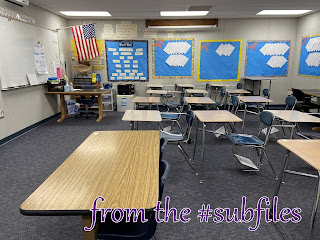 Because it was a "special day class", I had an instructional aide. She warned me that group could be volatile.

They came in, all eight of them, popping off to each other. Someone said someone's hair looked weird. Dan was fixated on his shattered Samsung mini tablet. All I wanted was for them to settle down.

They did, kind of.

But then, someone said something, and Grace was ready to beat up Thomas over it.

The IA went to defuse the situation, attempting to send Grace to another class where she wouldn't be irritated by Thomas. Grace refused to leave.

(Later, the IA told me Grace explodes regularly. Asking her to leave was sending her to a room where she would be able to calm down, rather than remaining in class where someone else would bait her to explode again.)

Time to call security to escort her out.

The IA stationed herself between Grace and Thomas. I doubt anyone got much of their worksheets done.

It was odd. Security usually shows up pretty quickly. But this time, fifteen minutes later, at just about the end of the period, he arrived.