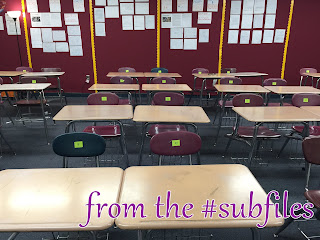 Thursday, two weeks ago. I was covering for a special ed teacher who co-taught all day. It's a pretty easy gig when the other teacher is present (as opposed to also having a sub).

I was to co-teach with three different teachers. Plus, I was to cover an extra period somewhere else. The schedule was:

In other words, I was not in the same room two periods in a row. So, I got to do lots of walking that day.

During first period, I got a call from the office. Instead of co-teaching third period, I was to cover a different English class. As luck would have it, that room was right next door to the class I'd be in periods two and four. Okay, then.

Second period. The eighth graders were writing an essay. It was pretty quiet in the room.

So, the noise from next door was more pronounced.

We could hear voices. We could hear banging. It sounded like kiddos were running into the walls. Or just hitting them. (Neither scenario is ideal.)

All I could think was, I have to cover this class next period. Eeek.

It was so bad that Ms. R went next door to yell at them. It didn't make a dent.

Period three wasn't nearly as bad. They were a bit obnoxious, but there were only a dozen or so of them, so that made the period that much easier.

I book assignments ahead when I can. One look at my calendar, and I saw that I was scheduled to cover this same class all day in a couple weeks. For three days. Eeek.

I'd worry about that when it came time. I took a breath and got through the rest of my day.

When I period sub, if the note I want to leave is going to be longer than "the class was fine", I like to email it. So, when I emailed the teacher, I let her know that I was scheduled to cover her class later. Having the communication open is better than not, right?

She emailed me back. She was not going to be out for three days, only one.

I breathed a huge sigh of relief. Three days with that group... But one day I can manage. And I put it out of my mind.

It was Thursday of last week when I called to book some dates for this week. The only class I had scheduled was for Friday for this teacher.

There was a math class for Thursday... Well, for Thursday and Friday. But I already have a gig for Friday. Well, it's better to stick with the same class for two days if the teacher is out two days, so they could just reassign that English class...

And now there are none. Instead of tonight sweating out having to deal with that class tomorrow, I am scheduled to return to a high school math class.

I've been granted a reprieve. Woo-hoo!

Assuming that all goes according to plan. Lately, that's not so certain. (See tomorrow's post.)
Posted by Liz A. at 8:00 AM