Not on the Vocabulary Assignment 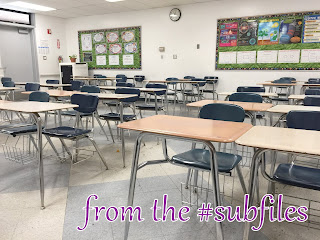 "What does 'prostitution' mean?"

It was a seventh grade science class. They were supposed to be working on a vocabulary assignment dealing with erosion and weathering (earth science stuff). And mostly they were.

But seventh graders can be easily distracted by random stuff. And even though they weren't supposed to be on their cell phones (I had banned them as they had abused the privilege the day before), clearly something had caught the eye of a group of three boys sitting on the right side of the classroom.

I said something about them having an assignment to complete.

So, the one boy sitting behind the other two looked down at his lap and quoted, "Violators subject to prosecution..."

Oh, so the boy just misread something. Again, not on topic. And we didn't need to go down that particular rabbit hole. I again directed them to get back to work.

But you know they didn't. One of the three had to look up on his phone the word "prostitution"...

I'd've thought they would have heard the term before. Apparently not. Because suddenly all three boys were looking around with wide eyes...

And I made a note of this for their teacher. Because, well, it was that kind of day.
Posted by Liz A. at 8:00 AM