Too Cold for School 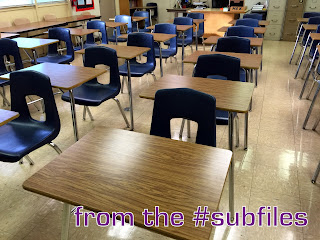 Since everyone in the blogosphere kind of took the end of the year off, I saved my subbing stories from the last week before winter break for this week. I have no idea what the weather is going to be like when this posts, but before the break, we had a bit of a cold snap (for us).

We southern Californians don't do cold well. And what we consider cold...

It was Monday of the last week before winter break. And it was cold. For us. With gusting winds. I believe our high this day was 61°, but this incident took place before we reached our temperature peak.

The heater in the classroom was broken. The teacher had set up two space heaters to compensate. When I arrived in class, the thermostat read 56°. By the time this incident happened, we were up to about 64°.

Carrol... We've had dealings in the past. She's loud. Obnoxious. Rude. On a good day.

We were all cold. I wore a sweater to school. I don't normally wear a sweater, but I knew this room would be cold. The sweater kept me comfortable.

Carrol, who comes to this same class every day and knows that the heater is broken, complained about the cold. She took the space heater that sat in the front of the classroom and put it on her desk. She shivered.

"It's too cold for school."

Carrol then took out her cell phone and texted her mother. (Arguing with her about having her cell phone out would have been fruitless.) Carrol wanted permission to leave for the day. Because it was too cold.

She then asked for permission to go to the office. (Her asking for permission was considerate for her.) She explained that she's done this sort of thing before. She just needed to get her mother on the phone with the people in charge. I didn't really follow the logic.

If it had been anybody else, I would have tried to talk her out of leaving. It was getting warmer in the room. She had work to do. But I've learned that arguing with Carrol turns into a big, ugly mess.  So, I let her go.

A half hour later, Carrol was still on campus. (She appeared just as I was telling the teacher, who dropped by for something out of her classroom, all about this.)
Posted by Liz A. at 8:00 AM